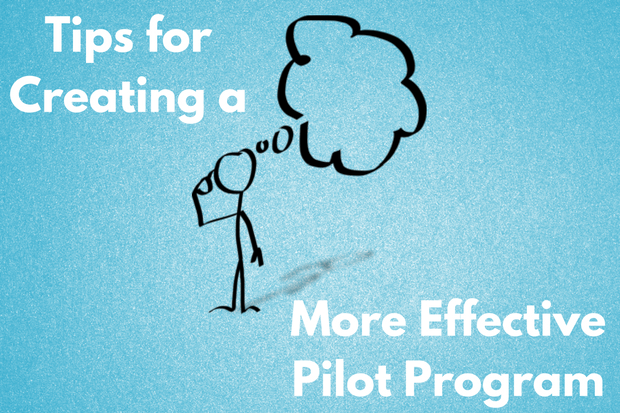 With all the options available for bringing educational technology into the 21st-century classroom, deciding which program is the right fit for your school district can often seem like an overwhelming decision. And it’s certainly an important one.

But once you’ve decided which program to go with, the hard work doesn’t end. It’s not enough to choose which ed-tech program you want. You have to develop a pilot program to successfully integrate the program into your classroom and to genuinely gauge its long-term potential.

This is where a lot of school districts get tripped up.

The Importance of Better Pilots

According to a 2014 study by the non-profit organization Digital Promise, 62 percent of district administrators depend on pilot programs as the most important resource for making sound ed-tech investments. Despite the availability of tech studies and informational sources designed to help them choose wisely, pilot programs are important.

A subsequent analysis of the study “also showed that few districts have formal processes for conducting a pilot, leading to frustration within schools and among ed-tech providers. Majorities of both school district staff and ed-tech executives asked for help in doing better pilots.”

The Essentials:  From Design to Data

What would a successful ed-tech pilot program look like? What pitfalls should it avoid? How can districts determine whether or not a particular tech tool is worthwhile?
In 2015, Digital Promise followed six school districts as they experimented with piloting new ed-tech programs. The goal:  To understand how to pilot ed-tech programs better.
So what did they find?

Given these and other important benchmarks to consider, how would you go about planning a pilot program?

K-12 Blueprint offers a nine-step plan for a more robust, effective program. Here are the steps they recommend:

Of course, as with any resource, it’s important to tailor the specifics to your district’s needs. Want accurate results? Avoid taking a one-size-fits-all approach to your pilot program.

A Pilot Program in Action

Beaufort County middle schools in South Carolina issued all of their students a laptop. However, in remote portions of the county, some students cannot afford Internet access. Local libraries saw students sitting in parked cars trying to access the Wi-Fi after library hours in order to complete homework.

Beaufort County Library partnered with their school district to launch a six-month pilot program of the Kajeet SmartSpot® devices using funds from the county library budget. The school district identified students in need, and then the library managed the checkout and training process. The devices were put into the libraries with the greatest need.

“If you can’t afford access, then you fall behind your peers,” said Ray McBride, library director, Beaufort County Library. “That’s what this particular model is designed to alleviate.”

The selected students took home a device for the full six months. Those selected had to have a library card and couldn’t owe more than $10 in library fees. As part of the pilot program, the library required users to fill out a survey every month about their usage or they would shut off their access. As for training the new users, McBride said they didn’t need to be trained, “it’s that simple.” The library expected only 70-80 percent of the devices would be returned, and the team planned to replace devices or missing components into their funding.

“[Students] only get educational websites…and get to access the school district resources as well,” said McBride. Beaufort County Library recently wrapped up their pilot program, and the principals and teachers said it was effective. “We want to measure the success from the school district also,” said McBride. “Did the students begin to keep up with their peers? That’s most important to us.”

The library has received a grant from the federal Institute of Museum and Library Services (IMLS) administered by the South Carolina State Library (SCSL) to expand the program to five times the number of SmartSpots®. McBride believes this expansion will allow for better results and tracking of the program success.

With the expanded program, the students – both from the pilot group and additional students – will have their devices at home for the rest of the school year. McBride says they are advertising at three of their five library branches, and emphasized how it’s really for students as an “educational supplement.”

Now that you know how to think about and approach your next ed-tech pilot program, take Kajeet Education Broadband™ for a test drive.