How to Engage Parents in Student Technology 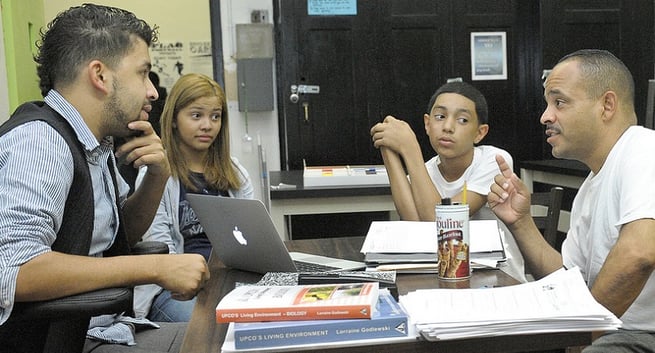 Although it is ultimately the parent’s choice on whether or not to bring technology home, districts are finding that a few key steps, such as strong communication and asking for input, can help their tech initiatives be more successful.

Three years ago, when Richland School District Two (Richland Two) in South Carolina began planning its 1:1 program, it surveyed families and learned that 7 percent did not have Internet access at home.

“We found Kajeet SmartSpots and started a pilot with 25 families and increased the pilot every year,” says Donna Teuber, Director of Technology Integration and Innovation.

In addition, Teuber says the district has tried to reach all parents, particularly those who are the least involved, by holding district-wide evenings to discuss the 1:1 program and forming a committee with parent representatives from each school to meet regularly and talk about 1:1.

Cincinnati Public Schools (CPS) has built relationships with families that are not tech savvy by having listening sessions.

“We’ve gone to the Urban League, a local mosque, the international welcome center, and community organizations to talk about our tech initiative, My Tomorrow*ed, and ask people for input,” says Debra Crawford, Blended Learning Coordinator. “These sessions are delivered in the community’s primary language and translated, and there’s a lot of follow up after.”

CPS also works with Parent Ambassadors—champions for My Tomorrow*ed—who reach out to other families and hosts coffee hours that administrators attend to build relationships around technology.

Crawford says the strongest strategy for involving families, however, is via student-led parent professional development sessions. “The student invites parents and family members in and walks them through the software he or she uses, his or her career pathways, and more. Once the parents see what their children are doing, they get excited and want to learn more."

Parents opt out of tech programs for a variety of reasons.

“We’ve had parents turn down the Kajeet SmartSpot because they are afraid of the responsibility, fearful of technology, or afraid of what Internet access will bring,” says Jason Naile, Coordinator of Digital Learning for Forsyth County Schools in Georgia.

He educates people on proper tech usage and web filtering, and the district has also amended its policies so that students who bring home SmartSpots aren’t liable for broken devices, as long as there’s no negligence.

Some schools offer tech classes that cover general technology topics, as well as the devices and tools Forsyth students use. “Many parents are unfamiliar with the equipment or being online, and one school found it was helpful to do some ground work before discussing devices,” says Naile.

“You have to let parents see what the technology allows the students to do, and show them student work,” says Teuber. “They must see the benefits early on.”

For districts that want to get parents more engaged, specifically those who might be part of the digital divide, nothing is more important than building relationships.

“People will value what you say a lot more if they know you care,” says Rolonda Smith, Family & Community Engagement Coordinator at CPS. “We can go wide but nothing will penetrate if we don’t spend time getting to know people, recognizing what they bring to table, and then talking about why technology helps overall academic, social, and emotional success. People receive the information differently once they know you genuinely care and are in partnership for their child’s success.”

One of the ways CPS proved that it listens to its community is when the district was launching a digital learning tech truck in 2015. Crawford was discussing the truck with the parents on the steering committee when a parent said,

“I love that you are doing this but you have to have some research to help people understand why this is important.” For Crawford, that comment was crucial. “We have to explain to parents how the tech is being used and why,” she says.

Forsyth’s Naile agrees that creating awareness goes a long way to getting buy in.

“Even if one school has a success story that you can share around tech access and what that brings about for the students, start that conversation,” he says. “Don’t be overwhelmed by the need and let that create inaction.”

Richland Two believes strongly in doing focus groups to see what the issues are and asking parents to brainstorm about solutions.

Whether your families hear about your district’s tech happenings via snail mail, email, text, twitter, Facebook, your website or district app, or face to face at a Back to School Night, the keys are to make them feel included, listen to and address their concerns, and clearly describe what is happening and why it matters. Having parents on board can help take your tech program from good to great.